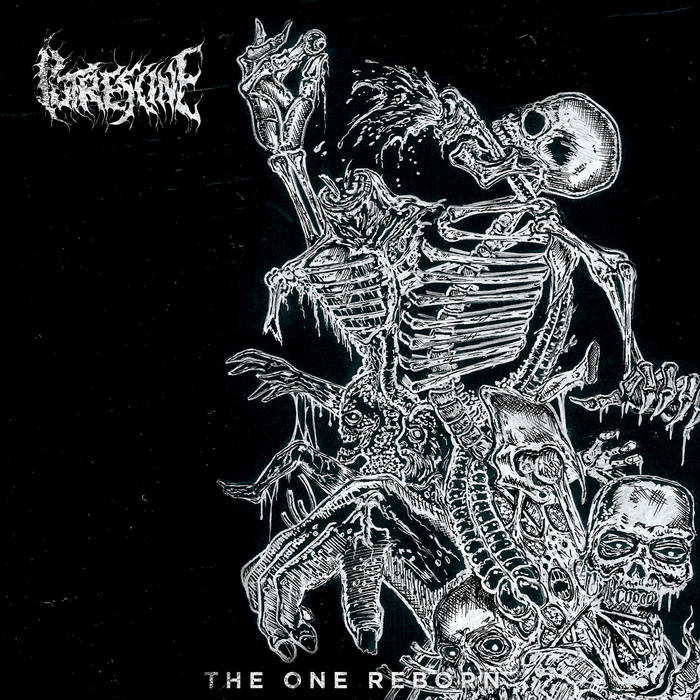 bortknockols It's so heavy it crushes. Stop reading this and blast the whole album. Favorite track: The One Reborn.

Bonus tracks limited to this version.

With conceptual inspirations looking at both their leftist political leanings and a particular strain of Gothic horror lifted from action-role player Bloodbourne, San Diego three piece Putrescine are, on paper, a rather unique proposition. However, whilst their music may espouse a timeless hooks ‘n’ grooves philosophy steeped in the buzz-saw rage of Stockholm and the ornate menace of Tampa Bay, the bands debut EP The One Reborn could be rather easily dismissed as a simple tribute to old school death metal values. Luckily, the furrowed brow fury and songwriting quality on display swiftly quashes any grumbles that these tracks are not significantly original.

It is all convincingly unpleasant stuff, the listener swept along amid showers of percussive clatter, the traditional sewer splurging lows/lacerating highs vocal switcharoo and a thick haze of malevolent ambience. However, it’s the relentless barrage of ferocious and joyously incisive riffs that spew from the guitars of Trevor Van Hook and Zachary Sanders that makes everything from savage opener ‘Child Sized Coffins’ and the mid-paced cudgeling of ‘Inhuman’, through to the barbaric multi-limbed attack of ‘Entropy,’ resound with power, depth and electrifying intensity. For a debut release this is remarkably assured; evidence, perhaps, that Putrescine have what it takes for the long haul, and despite its understandably raw production The One Reborn contains more than enough promise to suggest that a full length record could strike a diabolical chord with death-heads the world over. Watch this space.
- Astral Noize (astralnoizeuk.com/2019/09/09/review-putrescine-the-one-reborn/)

A variety of lyrical themes, ranging from anti-imperalism and leftist political issues to ones influenced by the Dark Souls video games, give The One Reborn a real sense of character, and the music itself is hard-hitting, twisting and turning at a moment’s notice and with some great solos. The One Reborn is a remarkably assured and cohesive debut, and marks Putrescine as ones to watch in the death metal underground.
- The Sound Not the Word (thesoundnottheword.wordpress.com/2019/09/30/review-blasts-september-2019/)

The One Reborn includes five tracks, in which vicious vocals are performed by all three members — guitarist Trevor Van Hook, bassist Zachary Sanders (who is also credited for the leads in the songs), and programmer-of-drums Marie McAuliffe. Yes, the drums are programmed, but I couldn’t have told you that from the music alone. The vibrancy of the bass augments the head-hammering, body-moving rhythms in these songs, but it’s the quality of the riffs and the soloing across the EP that make it such an exceptionally electrifying barrage of sound.
-No Clean Singing (www.nocleansinging.com/2019/08/17/death-rituals-part-1-putrescine-void-omnia-insanity-cult-phobocosm-dawn-of-disease/)