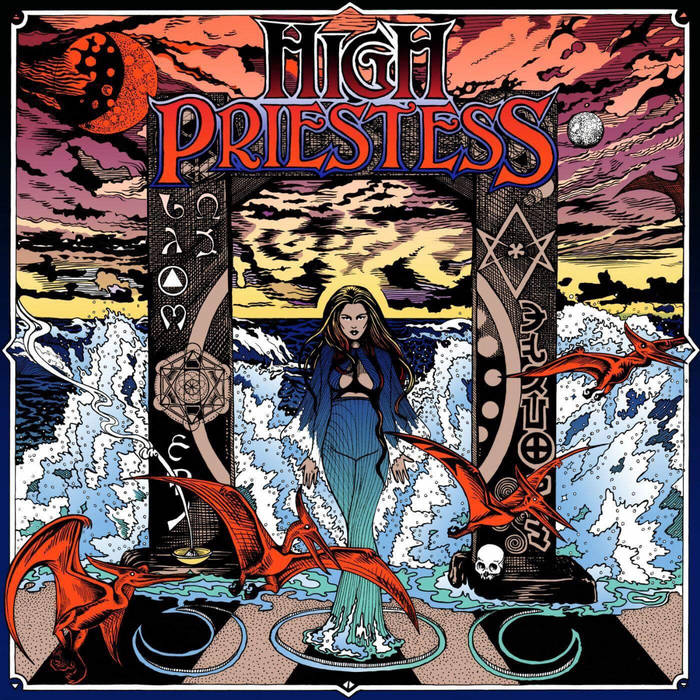 Last year, three women from Los Angeles were solidifying the name for themselves made off of the desert-psych offered in their 2017 demo, given full structure and form on their debut self-titled LP, High Priestess. Now in 2019, Tridroid Records is honored to give these masters of mysticism the cassette treatment and help bring this album to an even wider audience.

Known for their ability to craft sounds and rhythms that shimmer just outside of our own world, High Priestess constructs their own reality through the use of fuzz-drenched guitar tones, meditative harmonies, and the Eastern European flair that is entrenched in their work, immediately apparent on the opener, “Firefly.” Guitarist Katie Gilchrest and bassist Mariana Fiel are able to construct realms usually opened only through the use of multiple layers of synth or instrumentation with their vocal strength alone, showcasing the intense and meticulous nature of their music. Every note and beat from Megan Mullins’ ethereal percussion, whether rhythmic or tribal, creates a wall around the other members, complete with several doors that each measure or fill allows them to step through and build the tracks to near monolithic heights. And while they do display a penchant for vocal enchantment, the density of High Priestess is not offered solely through the gain
levels of their amplifiers. In “Despise,” we see sounds such as the unavoidable slides from Gilchrest’s fingers across an acoustic guitar being used as flitters of light in this other dimension that they’ve placed us, or sporadic palm mutes representing growing tears in that same plane as the music intensifies. And throughout all of this we get some low-level growls being used so sparingly that it adds an altogether new aspect to the song whenever present, something that is immensely satisfying and done to greater effect with the intermittent shrieks appearing on the following track, “Banshee.”

There are countless layers of fantasy and reality that High Priestess explore within just a 40-minute runtime that it would take a dissertation in order to properly unpack everything that they present on this debut. Whether it is the mystic-fueled doom of the aforementioned track, the psychedelic rock of “Take the Blame,” or the soul tugging bends that fill the closer “Earth Dive,” there is enough diversity, yet precise cohesion, that this will undoubtedly appeal to a variety of listeners and deliver in ways that presents the world around us through a different lens, questioning just what this music has awakened from the corners that we
cannot see.