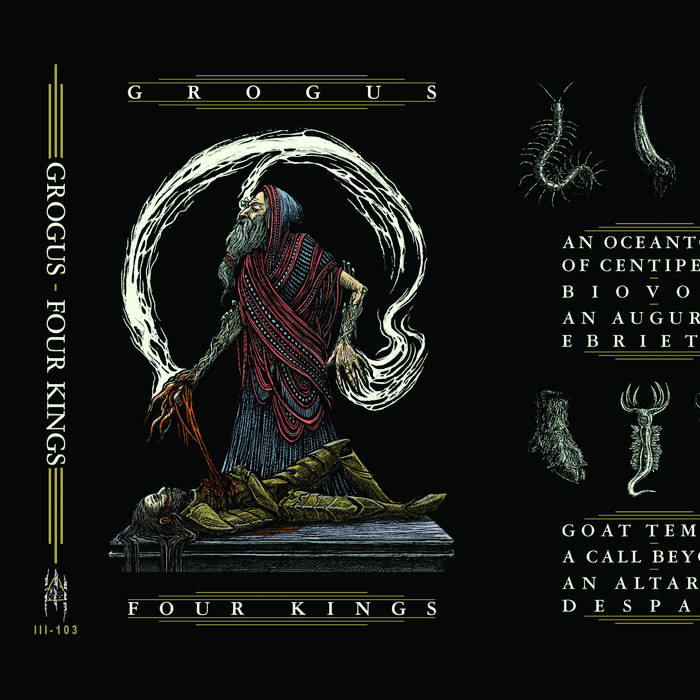 Heddbuzz Some of the sickest sludge and twisted, contorted riffery to these ears recently. Didn't even know about a cassette tape tho. Bonus Grogus. Favorite track: An Altar of Despair.

mypeaceb4u Wow, ready for battle. Your go into War with this group. Hard as F&@% Favorite track: An Oceantomb of Centipedes.

19 Make Contact, Praise the Sun Favorite track: A Call Beyond.

Beyond a torn barrier of reality, itself nestled between a rotting cosmic garden and some place called Minneapolis, resides a trio with the moniker Grogus, who perform some of the most implacable music heard this year on their new record, Four Kings. The simplest genre tag to give them would be a blackened melding of sludge and hardcore, yet the record moves at such irregular speeds that you’ll keep finding yourself, arm outstretched, with Grogus just a few steps ahead of you. If you don’t pay careful attention you might lose sight of them altogether, dissipating like ritual smoke into the unknown.

The opener, “An Oceantomb of Centipedes,” initiates the sense of the unexpected that the listener will come to expect over the course of the next six tracks: brittle and crunching distortion, mantle-splitting bass, and a series of rhythmic patterns and progressions that refuse to walk a straight line to connect to each other, instead opting for a nervous system-style route with branches of speed-motivated thrash riffing, pummeling down-strokes, and disorienting harmonic screeches. There is no constant within the music; while many musicians aim to create something “larger than themselves,” Grogus instead seem to have made a thing with its own consciousness, changing tempos within a single riff just as we would change focus in the middle of a crowd. After this miasma of sound, with a marriage of drowned shouts and frontal growls, comes a respite of chorus-drenched clean guitar; the echoing shouts from before swell upwards past a back layer of distortion, while the percussion builds in intensity. This upsurge first seems to climb towards a pinnacle harkening back to the beginning, but instead it expands upon the track’s newfound breadth and blackened, atmospheric tones.

The subsequent tracks “Biovore” and “An Augur of Ebrietas,” via the same chaotic frenzy that opens the record, charge straight in with a heaviness that irradiates the listener and shatters you on impact, pieces pelting off of every beat from the snare. Then, halfway through Four Kings, Grogus take a wholly different approach, eschewing the physical presence of the band members and allowing the more ambiguous facets of their music to take control in the experimental epic, “Goat Temple.” Far more substantial than a standard interlude, this track brings in bitonal synths that flicker in the background, furthering its cosmic identity, then forms a shamanistic shroud with rolling cymbals, hollow percussion, and wavering distortion. This diversion heightens the impact of the return to “form” in the subsequent track, “A Call Beyond,” which is rich with d-beat/hardcore energy while echoing back to the technical strangeness of the album’s opener.

All the way through to its final moments, Four Kings is primal yet insightful, aggressive yet methodical. Their inability or sheer refusal to be tethered down to any sort of linear structure gives Grogus the otherworldly presence they embrace as their own. And if Four Kings is any indication, they have some incredible weight behind that claim.

Volume 002
All music and lyrics written by Grogus
Produced by Grogus and Sam Lewis
Engineered and mixed by Sam Lewis at Nightmother & Co. in July of 2018
Assistant Engineer Char Nolan
Mastered by Adam Tucker at Signaturetone Recording
Art by Stephen Wilson - www.unknownrelic.com