Bury Me Beneath This Rotting Earth 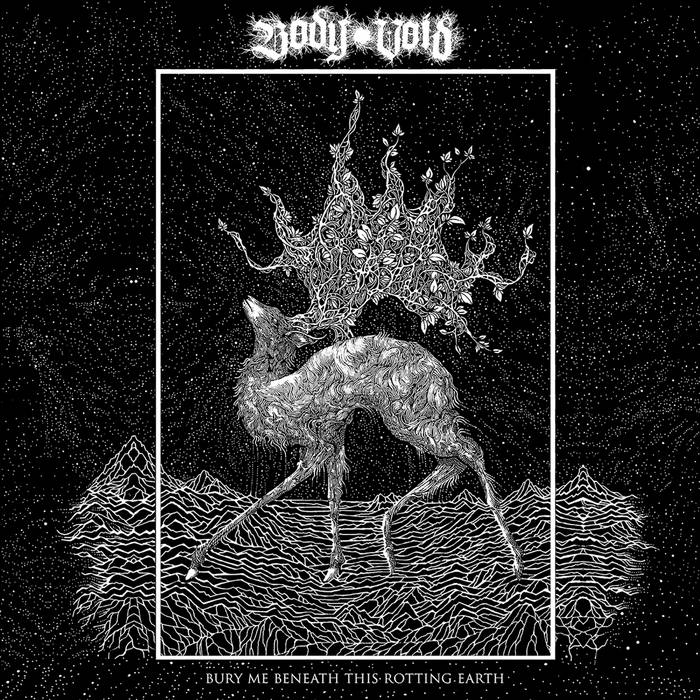 fobo The record is a pitch-black gravity well from which there is no escape. None heavier or more bleak, and an absolutely beautiful package.

Revolt of the Apes

BODY VOID will release their third album this April; Bury Me Beneath This Rotting Earth is a bold, ambitious four track blackened doom opus.

Recorded in June 2020 whilst the United States of America teemed with discordance and conflict under the heat of a sweltering summer and a tyrannical leader, Bury Me Beneath This Rotting Earth evolved into a document of its surroundings; a product of its environment. At Blackheart Sound in Manchester, New Hampshire the two members of BODY VOID worked with producer Eric Sauter, to process their feelings - both those that had been long festering, and those which were new and raw - into the four tracks that make up their third studio album. An additional layer of electronic filth was applied with the help of solo noise musician, and BODY VOID touring bassist, Entresol.

Lyrically, the album addresses the state of the USA within the context of the ever-decaying earth. Part love-letter, part manifesto, the tracks swing between the specific merciless destruction of climate change, and the complicit mindset that allows devastating harm to run rampant through society. The roiling disgust at the human impact on a cherished planet is juxtaposed with a defiance and devotion to embrace the Earth as it is, flaws and all.

The telluric nature of each track, in all their earthy, textured glory pay a sonic tribute to the earth. The expansive sounds and sludgy atmospherics make this a definitive doom record but with a progressive edge that hints at noise, punk and black metal. None of the tetrad of songs clock in at less than twelve minutes - with an organismical ebb and flow and a natural propulsion that prevents stagnation.

The album artwork depicts a deer mid-transformation, and reflects the themes of metamorphosis present in the music. Created by Indonesian artist, Ibay Arifin Suradi, who has worked with the band throughout their existence, the black and white image is stark in its beauty.

Far from being a lamentation of defeat, despite it’s oppressive sound, Bury Me Beneath This Rotting Earth is both a clarion call and the sound of devotion.


Bury Me Beneath This Rotting Earth will be released on April 23 via Prosthetic Records.

Recorded at Blackheart Sound in Manchester, NH by Eric Sauter in June 2020

Mixed and Mastered at Earhammer Studios in Oakland, CA by Greg Wilkinson